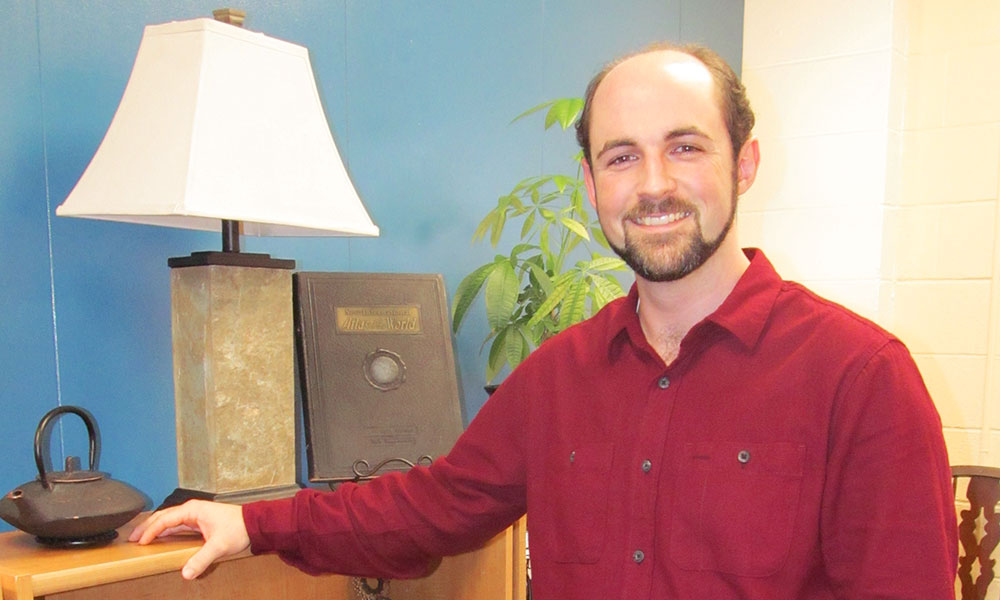 A licensed mental health counselor (LMHC) Christopher Battles at his new office at 185 E. Seneca St. in Oswego. “Most of what I do literally takes place while sipping tea and helping clients with the art and science of being human,” he said. “Clients come in, unplug, and talk confidentially for about an hour.”

Calm your mind. That is the mission of Christopher Battles, an Oswego native and owner of his own private practice, Equanimity Counseling, located at the Business Expansion Center, 185 E. Seneca St., Oswego.

He works with adults and teenagers who are battling through issues such as anxiety, depression and post-traumatic stress disorder.

“Most of what I do literally takes place while sipping tea and helping clients with the art and science of being human,” he said. “Clients come in, unplug, and talk confidentially for about an hour.”

The word equanimity means mental calmness in the face of adversity.

“It embraces the reality that emotions and chaos are a part of life and that we can get through it,” he said.

It is used in mindfulness counseling and a synonym for mental wellness, mental or emotional stability or composure, especially under tension or strain, he said.

Battles said there is much stigma surrounding counseling.

“Admittedly, psychotherapy sounds like a scary word, and the way media characterizes mental health doesn’t help either,” he noted.

Counseling is a therapeutic alliance based on empathy without judgment, Battles said, and the “magic” of empathy is being able to see through a client’s eyes in an unconditional and nonjudgmental way.

“That’s a really hard skill, especially for an elder millennial like myself,” he said.

He uses treatment strategies such as cognitive behavioral therapy to create mental clarity and psychological healing.

“People should find a counselor they work well with, just like they find a family doctor, to help with the agony of adjusting to life, depression, anxiety, post-traumatic stress, anger and explosiveness, and other mental disorders,” he said. “On the whole, people seek treatment for broken legs but hesitate to get help for broken lives.”

Luckily, Battles said, society is waking up to the fact that mental illness, like a broken leg, benefits from professional treatment.

Michael Phelps, the most successful Olympian of all time, has made a second career out of creating awareness about mental health, while comedian Howie Mandel is known for his saying, “If we treated mental health like dental health, we would be OK.”

Battles is determined to de-stigmatize, normalize and humanize psychotherapy.

“Culturally, people are finding out — and not just the Silicon Valley people but NASDAQ companies — that investing in mental health as a preventive or recovery tool for their employees” aids the bottom line immensely.

A licensed mental health counselor (LMHC), Battles has passed extensive board exams while logging thousands of hours of clinical time.

Battles is also a nationally certified counselor, the premier national counseling board certification that connotes he has gone the extra mile insofar as education and professional development.

“On the business side of things, I joke that I have an MBA and CPA from the school-of-hard-knocks,” he said. “I had to learn the ropes this year — QuickBooks was nearly the end of me!”

Creating his own private practice was in line with his artistic world, complete with its creativity and individualism.

Battles earned a bachelor of music degree in music education with a minor in jazz studies from the Crane School of Music at SUNY Potsdam.

“Folks come in here and you got to find their way. That’s the purpose of counseling is to find that person’s way through whatever it is they are working through” in an empathetic manner, he added.

The “magic” of empathy is being able to see through a client’s eyes in an unconditional and non-judgmental way, he said.

“That’s a really hard skill, specially for an elder millennial like myself,” he noted. “There isn’t a syllabus for this.”

“It’s people trying to wrestle with demons, or attempting to overcome what is referred to as a ‘house of mirrors’ that happens in one’s mind when emotions get high and when thought patterns are so ingrained that one starts feeling estranged from their own culture because of failure to fit its archetypes. That can really wreak havoc in somebody’s mind,” he said.

While he sees himself as a classically trained percussionist with the heart of a jazz and Latin drummer, he spent several years after graduating college as an acoustic singer-songwriter and even produced an extended-play musical recording while living and substitute teaching in New York City.

Battles moved back home to Oswego and continued exploring music while entering into SUNY Oswego’s graduate program for school counselors.

“This was actually my first venture into the science of psychology. I found fantastic mentors and the power of empathy, which ultimately led me to clinical work,” he said.

He said sometimes music and other facets of his life help build a strong therapeutic connection with a diverse array of clients.

“I’m personally more of a ‘Blue Moon Café’ on TK99 with Mimi Griswold kind of listener,” he said.

Battles also features trinkets around his office from his Adirondack High Peaks 46er journey, a mini-library of self-help and psychology books, fidget puzzles, plants, and bike-related items from local cycling clubs that he belongs to.

Battles said pursuing his music career “might have been the first dry run of what it is like to be an entrepreneur.”

“Coming here, I was a bit familiar in the sort of paperwork needed to get a business going, as well as branding, public relations and design,” he said.

However, “where the rubber really meets the road involved areas such as taxes and accounting,” he added.

“You have to keep your patience, be precise, and chip away at the to-do list every day,” he said. “That is something that I have developed in the last year — that entrepreneurial skill set of being able to create that to-do list and knowing that nobody was going to help me with it.”

Oswego Speedway: Roaring Back to Life