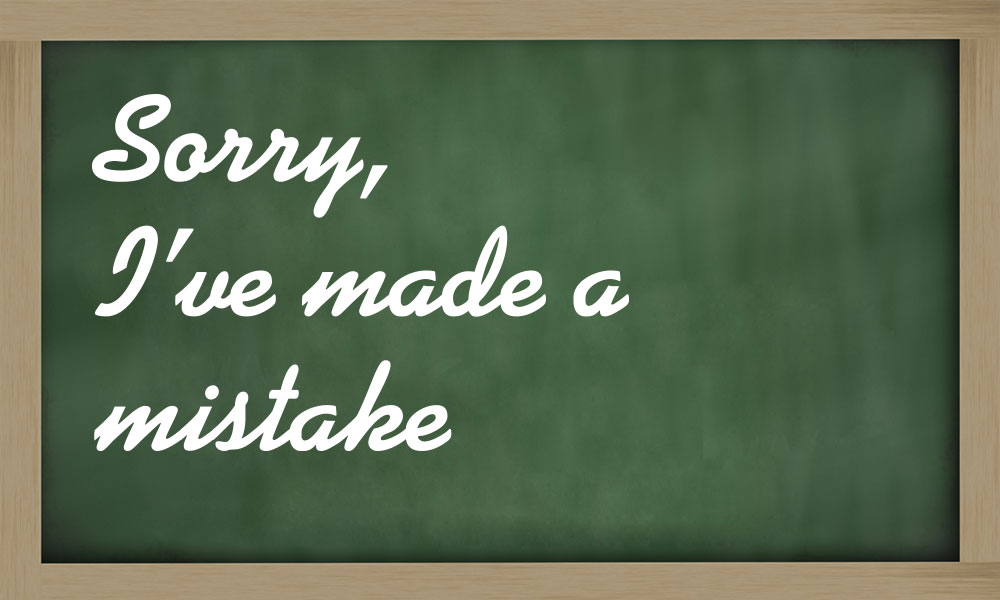 President Trump has shown an unwillingness to accept that he makes a mistake or says something that was not correct.

Too many business people and professionals believe that admitting that they made a mistake is a sign of weakness and will lower their standing in the eyes of their employees and the public.

I see it as just the opposite: Owning up to an error is a sign of self-confidence, ethical behavior and an acknowledgment that everyone makes a mistake now and then. It is how we deal with and learn from them that really shows what we are made of.

At the top of the “no apology under any circumstances” philosophy is the president of the United States, Donald Trump, who has made thousands of false or misleading statements since taking office on Jan. 20, 2017.

Trump is unwilling and unable to admit mistakes regardless of how inconsequential they may be. He sees admissions of errors as a sign of weakness; I see admitting mistakes as a sign of strength.

A perfect example of the lengths the president will go to try to cover up or justify a mistake occurred as Hurricane Dorian was gaining strength during its destructive march through the Bahamas and up the East Coast through parts of Florida and the Carolinas in September.

Trump misspoke at the time he claimed that part of Alabama would be greatly affected by Dorian. The National Weather Service took the extraordinary step to correct the president by issuing an alert that Alabama was not to be affected.

Instead of saying, “Whoops! Sorry about that. What I said was a mistake, and I apologize to residents of Alabama who were inconvenienced by my words,” Trump devised various ways to try to “prove” that he had not misspoken.

This is such a ridiculously minor episode, but the fact that Trump did what he did made it take on a life of its own.

Several days later, he displayed an official National Oceanic and Atmospheric Administration weather map of the impact area of the storm on which he had taken a Sharpie and drew an arc extending over part of Alabama as if to say, “See, I was right all along.”

Thousands took to social media to ridicule Trump for his weak attempt to save face, despite incontrovertible proof to the contrary coming from a government agency.

Columnist Eugene Robinson said it best: “As smooth goes, it was lamer than trying to forge a $100 bill by taking a Monopoly $1 bill and writing a couple of extra zeros on it.”

Stranger still was the issuance of a National Oceanic and Atmospheric Administration memo to supervisors and employees shortly after the president displayed the doctored weather map directing them not to contradict the president.

This means that a heretofore respected government agency that is intended to give potentially life-saving information to the public during weather crises has now become politicized so Trump could save face.

Even early on in his presidency when Trump tweeted “covfefe,” an obvious typographical error of some sort, he could not bring himself to concede when questioned about it, “Sorry, I goofed. I guess my brain was awake but my fingers weren’t. It was just an unintended typo.”

What he did instead was send then-Press Secretary Sean Spicer to explain to the news media and the American people, “I think the president and a small group of people know exactly what he meant.”

Of course, Trump has had a long history of not admitting errors, dating back to long before he was elected president in 2016.

When once asked about this tendency, he said, “I think apologizing’s a great thing, but you have to be wrong. I will absolutely apologize, sometime in the hopefully distant future, if I’m ever wrong.”

Admissions of wrongdoing are incredibly threatening for non-apologists because they have trouble separating their actions from their character, according to Guy Winch, noted clinical psychologist from New York City.

For most of us, an apology might open the door to guilt, but, Winch said, for non-apologists, it can be a door that opens up to shame. “While guilt makes us feel bad about our actions, shame makes non-apologists feel bad about themselves — who they are — which is what makes shame a far more toxic emotion than guilt,” he added.

‘That’s what successful businesses do, too. If an agent of a company makes a mistake, it’s the duty of the responsible employees to make it up to the customer in a way that makes things right.’

There is a certain amount of paranoia among non-apologists who believe that if they apologize they will open the floodgates to further accusations and conflict. “Once they admit to one wrongdoing, surely the other person will pounce on the opportunity to pile on all the previous offenses for which they refused to apologize,” Winch said.

Even though “I’m sorry” is one of the first things most children learn, some adults cannot bring themselves to say these words.

No one enjoys being wrong. It’s unpleasant, but it happens, and when it does, the easiest way out is to admit the error, apologize and learn from the experience.

When we printed an error in the two newspapers for which I worked during a span of 22 years, we ran the correction on page 2, ending with the phrase, “We regret the error.”

Regardless that our accuracy rate topped 99% on average, we always felt lousy about mistakes and tried to acknowledge them in a timely and professional way. Depending on the egregiousness of the error, we would sometimes run the correction on page 1 and, in certain cases, I called the affected person or persons to issue a personal apology.

That’s what successful businesses do, too. If an agent of a company makes a mistake, it’s the duty of the responsible employees to make it up to the customer in a way that makes things right.

Even if the customer gets a refund or something else to make up for a mistake, it should always be accompanied with an apology and a promise to do better.