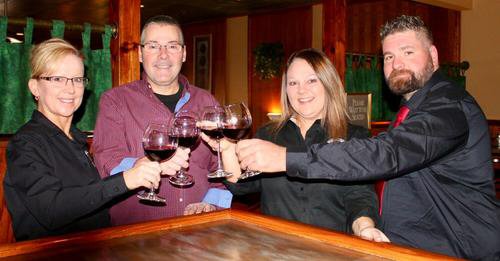 This follows a 17-year run by Bill and Karen Hubel as the owners and operators of the establishment. The Overtons officially began their ownership on Dec. 1.

It was a private sale. The business “was never on the market,” Stephanie Overton explained.

“I’ve heard it called a hidden gem. But, I know people from all across Central New York love it,” she said. “It’s not unusual for people from Onondaga County to make a drive to Fulton for a great meal at the Blue Moon on a Friday or Saturday evening. Above all, however, it’s really important to me and my family to maintain the integrity of the outstanding brand built by Bill and Karen for nearly two decades.”

Stephanie has been in the hospitality industry “my whole life,” she added.

“I’ve worked in the industry for 26 years. It’s always been a passion of mine to own a restaurant,” she said. “My husband doesn’t have any experience in the business. He will continue to work for the city of Fulton as well as play a big hand in our business. He’s a quick study.”

Their son, Macean MacIntyre, and daughter, Joan Overton, will also be involved in supporting the business.

According to Stephanie, the menu will remain the same, but hours may eventually expand.

“We’ve hired two new very experienced and qualified chefs we are bringing on. Bill will remain as a chef here training them for the next several months to ensure a smooth transition,” she said. “In addition, we’ll be offering a Mardi Gras menu in February, just as Blue Moon has for many years.”

The front end staff will stay the same, she added.

“Hours will change, gradually, and hopefully we will see some exciting changes on the menu down the road as well,” said Stephanie.

The Hubels said they’ve enjoyed serving the Fulton community during their tenure.

“Bill and I are grateful for the privilege to have shared countless special moments in peoples’ lives for so many years here,” Karen Hubel said. “We wish the Overtons every success and we’ll be offering a helping hand as they move forward.”

Blue Moon was originally established in 2000 by Doug Caster as Blue Moon Bistro, a combination restaurant/deli/ice cream parlor. The name was changed to Blue Moon Grill in the first quarter of 2004 when the deli case and ice cream counter were removed and a new cocktail bar/lounge was built.

In January 2005, Ray and Linda Grimaldi took over operation of the restaurant. Ray is the grandson of the founders of the original Grimaldi’s Italian Restaurant in Utica. Later that year, Bill and Karen Hubel became the sole operating partners of the restaurant and it closed for a short time for renovations before reopening in December with new carpeting, a rejuvenated bar/lounge and menu.

In February, 2012, following eight months of construction, the Hubels announced the opening of Under The Moon, a private dining area below the Blue Moon Grill, for up to 50 guests for special events. The space features Mahogany paneling a granite bar, wine cellar and separate kitchen. Over the years it has been the location of many celebrations, from anniversaries and birthday parties, bridal and baby showers, corporate meetings and more. In addition, it has also served as an entertainment venue; featuring nationally famous musicians and performers.

Stephanie Overton said Under The Moon’s availability for special events will continue. They are booking holiday parties and gatherings.

“We’re also looking at possibly bringing back comedy nights here in the future, as well as other events,” she said.

For further information, visit: www.bluemoongrill.com or their Facebook page under Blue Moon Grill.